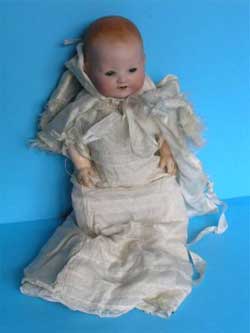 Man has made images of his own likeness for well over 1000 years, so it is impossible to tell the whole “doll” story on just a couple of pages; what we have tried to do is give a brief summary of the main developments. The most ancient civilisations fashioned dolls from cheap and readily accessible materials such as rags, stone, wood and animal hides – some very early examples of Peruvian and Egypto-Roman dolls have been found in graves, buried alongside their young owners.

Commercial production of wooden dolls in England seems to have started in the 16th Century, although Germany and Italy are also known to have had a wooden doll industry a little later on. The continental wooden dolls were well-made and had much better detail than the English dolls. By the early part of the 19th Century, English wooden dolls were beginning to lose their popularity, especially in favour of the European (principally Austrian) peg dolls, known as “Grodnertals”. One of the best-known collections of these belonged to the young Queen Victoria, but because they were relatively cheap, they were well within the reach of most families.

In the 19th and 20th centuries, doll manufacture became an important industry, most notably in Germany, but also in Britain, France and Italy and, after the First World War, in the USA. Dolls with heads of papier-mâché (literally chewed paper) or composition were widely manufactured in the 1800’s. Essentially, papier-mâché and composition are two terms that describe the same material; both were a varying mix of paper, water, resin, wood pulp, flour and, sometimes, plaster of Paris – each manufacturer tried to keep his recipe a secret.
In the 18th and 19th centuries, good quality and very life-like dolls’ heads were often made from solid wax and had human hair which was sold to the toy-makers by the public to make extra money for themselves. These dolls were the popular playthings of the richer children in the mid 1800s; however, it was not uncommon for these to be either eaten by mice or for the colour pigments to fade in the sunlight. Other ways of using wax were over papier-mâché (or composition) or poured into a mould. The mould method was favoured by some of the greatest manufacturers. 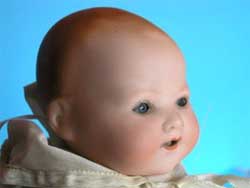 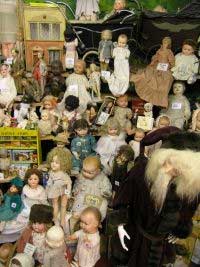 Life-size wax dolls were also made as mannequins for shop display purposes.
Toy Museum – DollsDolls’ heads were often sold independently, so that bodies could be made by mothers or nannies. Notable English makers included Montanari & Pierotti, both names revealing their Italian origins.

China-headed dolls were produced from around 1830 and despite the obvious drawbacks of their being very easy to break, production continued well into the 1900’s. Some of the well-known porcelain factories (such as Meissen) in Germany made china-headed dolls and the quality of craftsmanship of some of these early dolls is outstanding. By the 1900’s though, the popularity of china dolls was passing, but because of their fine quality, are still attractive to today’s collector.

The mid-1800’s brought many new developments and design improvements – Motschmann introduced the “baby” doll – up to this point, dolls had only taken the form of miniature women, or sometimes men, and in 1861 Mme Huret of Paris invented the “swivel-socket” neck. At the 1851 Great Exhibition in Hyde Park, Mme Montanari exhibited her rag dolls and around the same time in the USA the Goodyear Company patented rubber dolls with leather crowns for the attachment of hair.

The fabric doll industry thrived from 1900 to 1930 with the Kathe Kruse Company of Germany producing very realistic, hand-made, muslin-headed dolls. In fact the “Schenkerle” (Sand Baby) doll is one of the more collectable today. Its attraction was that (because its body was sand-filled), it had the realistic weight and “floppiness” of a new-born baby. Even though the name Steiff is most associated with the production of teddies and other soft toys, it is known that in 1908 around 2000 workers were employed in their German factory making a huge variety of fabric character and ethnic dolls ranging from dwarfs to clowns to policeman and many more.
Celluloid, an early form of plastic, was invented originally in the mid-19th century but came into use for doll-making slightly later when the majority of the celluloids had fabric bodies and celluloid heads and lower limbs. From 1900-1950, millions of celluloid dolls were mass-produced world-wide; the Second World War had a major impact on the European doll industry; most production stopped until peace returned, when the new plastics such as vinyl (developed for the war effort) were used in a huge variety of forms. The use of vinyl also brought a major difference to dolls’ hair. dolls had either had wigs or moulded, painted hair. Vinyl allowed manufacturers to “root” hair into the head.Another type of doll with appeal to collectors is that made of “bisque” – a fired clay with no finishing glaze. By the late 19th century, two of the principal manufacturers of bisque-headed dolls were France and Germany. Companies such as Bru, Jumeau and SFBJ in France and Simon & Halbig, Armand Marseille, Kammer & Reinhardt, J D Kestner and Gebruder Heubach in Germany, produced outstanding examples of bisque-headed dolls, much sought-after today. 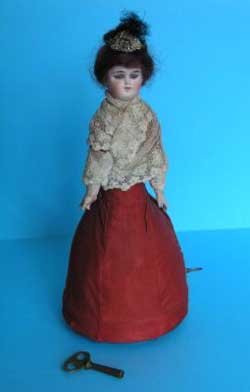 The modern period of doll manufacture has brought many new Companies to the fore, whilst some of the original names still remain, refining their dolls to suit today’s market. The popularity of modern dolls tends to be more transient than that of previous dolls, with fashions coming and going quite quickly. Available to today’s child are dolls that walk, talk, sleep, sing and cry, as well as story-book dolls, realistic “baby” dolls and teenage dolls (Sindy/Barbie) with an endless variety of accessories. Nevertheless, some of the 1960’s dolls as well as the cloth “Cabbage Patch” dolls first launched in 1984, only just over a decade ago, with their own “adoption” papers, are already very sought-after by some Collectors today.