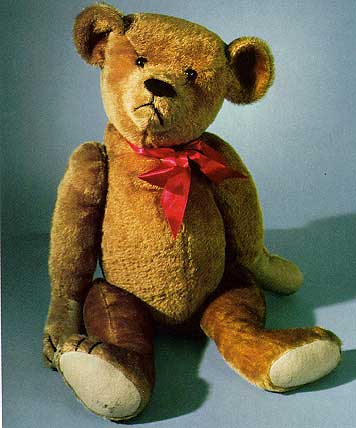 No-one could have predicted that the world’s most enduring and best-loved childrens’ playmate over the last century would have been something modelled on a ferocious wild animal, the bear.

America’s 26th President, the much-loved Theodore “Teddy” Roosevelt, is responsible for giving the teddy its name. On a hunting trip in 1902, the President refused to shoot a small bear which had been tied to a tree. Political cartoonist Clifford Berryman illustrated the incident in the Washington Post in many of his cartoons and soon the bear symbolised the President and was turned into a toy for children – the “teddy” bear.

About 20 years before this, the bear had already been used in automata-making. These clockwork bears, many originating in France, were designed to dance, drink and even smoke (see Automata section). At the same time, soft bears that stood on all fours and sometimes mounted on wheels, were being made in Germany as pull-along toys.

In 1903 in America, two Russian emigrés, the Michtoms, turned the little cartoon bear into a jointed, plush teddy bear and sold their samples to Butler Bros, who founded the Ideal Novelty and Toy Company.

In Germany, Margarete Steiff was also developing jointed, mohair, plush bears; childhood polio had confined her to a wheelchair and she became an expert seamstress, initially making children’s clothes and then moving on to soft toys which she sold via mail order. At first, her bears were not popular but at the 1903 Leipzig Fair, an American toy store buyer bought 3,000 of her bears. By 1905, the “button in ear” (Knopf im Ohr) was a protected trademark of Steiff. The Steiff factory was forced to expand and employed around 2,000 workers in an effort to satisfy a demand for bears that multiplied 80-fold within five years.

A further boost was given to the bear by the appearance of “Roosevelt Bears”, rhyming stories appearing in American newspapers which were then published in book form and gave rise to the production of novelty bear items such as mugs and spoons.

By 1907, the popularity of the bear soared and toy-makers in America, Germany and England were producing bears and related items by the thousands.

Early teddies were mostly made from natural materials (mohair plush, burlap etc,) and stuffings (wood-wool and straw) and soon a jointing system was developed giving mobility to heads and limbs; most had a “growler” mechanism.

Working on the theory that children treated their bears as almost human, manufacturers were quick to spot the opportunity to make and sell outfits for bears – some had uniforms – especially popular in America where the bear was initially marketed as the “boy’s doll”. 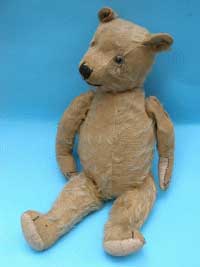 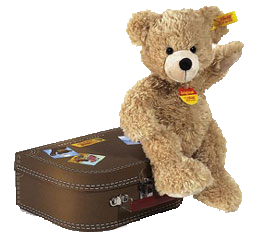 Characteristics varied, often according to manufacturer and date of production. Initially the bear was brown, had long curved arms, large feet, a humped back and pointed face. As time went on, more rounded features became popular, the humped back began to disappear, paws gradually became smaller and a variety of different coloured bears were introduced.

In 1920, the first of the “personality bears” began to appear with Rupert Bear in the Daily Express (originally dressed in blue jumper and grey checked trousers and scarf), followed in 1926 by “Winnie the Pooh”. The 1920’s was the start of an important era in British soft-toy making, with many new factories being established. Chad Valley’s Wrekin factory opened and H G Stone were making “Chiltern” bears. In the next 20 years, Pedigree Soft Toys and Merrythought joined in the soft toy boom.

An all-time best selling song “Teddy Bears’ Picnic” was released on record in the 1930’s, written by the legendary James Kennedy.

Again, it took the coming of another World War to affect teddy production. Both in Germany and England, toy-makers were asked to produce war-related items and others were destroyed in the bombing. Whilst limited soft toy production was allowed in some factories, wartime shortages forced them to use different materials.

Following the war, the 1950’s witnessed the re-birth of the teddy and new synthetic materials, often machine-washable, were used in their manufacture. New safety standards for toys were introduced in the late 1950’s, demanding the use of flame-resistant materials and safer “lock-in” eyes.

In the 1970’s and 1980’s, many individuals set themselves up as “teddy bear artists”, producing limited edition bears, often made from unconventional materials.

In modern times, teddy bear collecting or “arctophily” has become very popular and Auction Houses have had sales devoted entirely to bears, some rarities fetching astronomical prices. This has inspired some of the original makers such as Steiff to produce Limited Edition Replicas of their original designs.

Even though the teddy bear will shortly celebrate its 100th birthday, its popularity endures and shows no sign of decreasing – a tribute to the unique and special appeal of childhood’s favourite playmate.