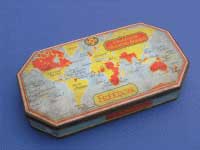 If we were to ask someone today to describe a biscuit tin they would probably reply by describing a fairly plain tin with either a flower motif on the side or with a picture of a rather cute, fluffy cat!

This type of design is common today, but during the last 150 years, tin design has been an art form in itself, with a variety of extremely beautiful and innovative ideas appearing.

Over the last 40\50 years, we have seen the virtual demise of the local grocery shop which sold some of their wares in very elaborate tins, especially at Christmas time.

From the late 19th Century, biscuit makers such as Huntley & Palmer, Crawfords and Jacobs excelled not only in their products, but also in their tin design – many aimed solely at children of more affluent parents. Designs were very decorative and detailed.

Most of the collectable and unusual designs were produced by Huntley & Palmer and included a lorry-shaped tin which had a hinged roof, picnic baskets (1897, a Windmill shape (1924), a farmhouse (1931), books bound by a fake leather belt with hinged lid (1901) and Coronation-related tins (1937).

Huntley & Palmer did not have the monopoly in unusual design; many other companies tempted people to buy their products housed in such tins as a “Silver Link” steam engine (1937 – McFarlane & Lang), a gypsy caravan (1937 – W & R Jacob), a beautiful Atlantic ocean-going liner (1927 – Crawfords) and a racing car (1926 – Gray, Dunn & Co)

One of the rarest featured at the Toy Museum is the Lucky Wheel (1929) by W & R Jacob; this is an inventive money box with a fortune-telling spinning wheel. Another unusual tin on show here is the Lyons Toffee Balloon tin which was sold originally with a crepe paper parachute so that the empty tin could be used as a toy parachuting balloon.

In the late nineteenth and into the twentieth century, a wide variety of products were sold in tins – eg tea, coffee, pharmaceuticals, cooking ingredients, cigarettes. Often, designs were simple, some just having the manufacturer’s name and a set of instructions printed on them; some of these are collectable today, but do not reach the heady prices realised at the novelty tin end of the market.

In comparison to earlier years, far fewer novelty tins are produced today, food manufacturers preferring the use of cardboard or plastic as the cheaper and more practical options for today’s consumer.

However, the Toy Museum visitor can still appreciate the beautiful tin designs of a bygone era which in their own way reflect the rapidly-developing domestic changes of the past century and a half.