Welcome to
The House on the Hill Museum

One mans collection – One mans dream!

Alan Goldsmith, owner and curator of the toy museum, was born during WWII, during a time in British history when so many sacrifices were made for the war effort in every walk of day to day life; toys were one of these sacrifices.

Alan’s passion for toys was ignited with the purchase of a small toy train when he was just seven. From that moment on he was hooked, over the years he has amassed an amazing collection of toys from every corner of the world dating from Roman times – simple wooden dolls – up to the 1980’s when modern technology in games took off with computerisation.

His collection became so vast that he decided to open the now world famous toy museum in 1991 to the public for all to enjoy. Since Alan first opened the doors there have been over 2.5 million visitors with many returning time after time as there is so much to take in, more than can be enjoyed properly in just one visit.
The House on the Hill Toy Museum has over 70,000 individual toys on display ranging from humble homemade toys, Victorian toys when they were mainly only purchased by the rich to the emergence of modern technology during the 1970’s and 1980’s.

Alan’s main dream of opening the toy museum to the public was to allow him to carry on collecting the rarest of dolls, teddies, board games, Hornby trains and robots etc for display to enable the visitor to see toys that may otherwise have been lost to public gaze forever.

Do you have an item for sale?

The toy museum is always interested in purchasing items to add to its already vast collection. Toys up to the 1980’s, WW1 & WW2 military items and relics, Rock ‘n’ Roll, film, TV and Theatre memorabilia, props, antiques and anything unusual. Please contact us to make an enquiry.

Can I donate items to the museum?

Donations are always gratefully received by the toy museum. Anything from single items up to whole collections.
To sell or donate your items to the toy museum please call +44 (0)1279 813237 for further information. 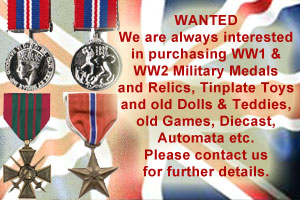 Visit the Mountfitchet Castle & House on the Hill Toy Museum
Facebook page to get all the very latest news on what’s happening.

Whilst at the House on the Hill Toy Museum don’t forget to visit Mountfitchet Castle. The Castle is a unique open-air museum experience where the visitor can travel back in time over 900 years and truly witness life in a medieval Motte and Bailey castle. Explore the Castle and roam through the Norman village hidden behind the castle walls, wander in and out of the many houses and view the scenes, smell the log fires burning and feel the ambience of a bygone lifestyle. Meet and hand feed the tame Fallow deer and other rescued animals that roam freely throughout the 10 acre site. Visit the only medieval Castle and Norman Village reconstructed on its original site to exist in the world. Take a look at our 2 minute video below to give you a taster of what to expect when you come to visit us. An all-weather, all-in-one heritage entertainment complex where prehistory, history and nostalgia combine to make one great full exciting

The Haunted Manor is spookily located within the Toy Museum and if you’re feeling brave enough to visit the bewitched tunnels and chambers a small extra entrance fee applies. But beware…this is not for the faint hearted!
Encounter our life sized dinosaurs on the way to the museum and try your hand at Fossil hunting in our Palaeontology House , can you find the Velociraptors claw?
×